Leaving no stone unturned in the pursuit of enterprise at Crakehall

WHEN an electrical fire destroyed the main hub of a farm in North Yorkshire four years ago livestock had to be moved sharpish and it was to signal a wholesale change of direction for a man who had made his name through dairy farming, robotic milking and all things dairy. Tim Gibson of Hunters Hill Farm, Crakehall near Bedale has moved on from that dark day and now operates a variety of agricultural and non-agricultural enter-prises from his 300-acre farm including a beef suckler herd, growing cereals and specialist haylage, a more streamlined dairy equipment business, self-storage units, a soon to be established rural office complex and a new business involving stone. You could say he’s leaving no stone unturned. ‘I’d made the decision to come out of having my own dairy herd of 200 cows earlier that same year,’ says Tim. ‘They’d all gone to Glastonbury in the spring, but I had been running the Brymor herd of 100 Guernseys side by side with my herd on a contract milking basis and we were focusing our efforts on doing well with them.’ ‘The fire had started through the wiring on a brand new machine that was still under warranty and the generator, which was there for backup, was also consumed in the flames. We lost all our mains electric power, the generator, telephones, internet, everything was wiped out and it took Northern Power Grid 18 months to reconnect us.’‘That night the more pressing jobs than worry about that was to make everything safe and get the cows away. They had been miked by robots and needed milking urgently because the power had been off since 9pm and the first trucks arrived to pick up the cows at around 5am.’ ‘Fortunately, a neighbour about 4 miles away put them all through his milking parlour while we sorted out what was to happen. Cows still need miking no matter what.’ Tim’s days of being a dairy farmer of any kind were finally over. ‘I’d kept the last heifers out of my black and white cows that had been bred to the Belgian Blue and they had become the starter of my suckler herd I have today. I now have 20 Belgian Blue X cows that I put to a British Blonde bull and their beef calves are taken through to finishing at around 15-18 months and sold at Darlington livestock market.’ ‘Our original intention had been to sell as stores in the autumn but 2 years ago
we went into a TB1zone, not through anything I had done, and I felt that if I sold as stores that buyers would have to do a post movement test and that would knock the price.’ ‘I’m totally spring calving which allows me to turn them out as they calve and the calves come in during autumn when they are fed on a beef ration. If we can, we try and run the cows fairly extensively by keeping
them out on root crops in winter. I’m using homegrown cereals to finish the calves.’ Tim grows cereals for both the open market and for the cattle, as well as potatoes and his newest contract is to supply haylage for Wensleybale. ‘I’ve 100 acres of winter wheat this year, 70 acres of winter barley, plus a bit of spring barley this year because of the way the rotation works. I rotate 30-40 acres of potatoes. What we’ve tended to do in more recent times is two years grass ley for haylage then two years wheat, one year barley, followed by stubble turnips. We take in around 400 store lambs for the stubble turnips. When they go it is then potatoes in spring, then wheat for two years and back to grass.’ ‘I buy a specialist seed and grow haylage that a contractor ensiles. 100 acres of haylage goes to Wensleybale for racehorse feed. They supply the major stables in Middleham and Newmarket.’ Stone has become Tim’s latest crop and he realised the opportunity through his own farm.
‘Our land type is very sandy, gravelly, stony dry land and it has been a constant problem to us, but there is a solution that I have found really helps many other farmers – and provides a new crop.
‘Stones, as any farmer knows, can cause untold damage to machinery and I now have a machine that alleviates the need to go and hand pick stones, while at the same time providing a new income.
I’m using the stone to build new tracks and roads to the farm for access.’ ‘I started contracting with a stone harvester. It’s a Finnish machine that rakes and harvests and the market value of the stone has made it viable for us to go on to farms conducting stone clearance at a really competitive price. We are now harvesting stone as far away as Newcastle and Harewood.’ Tim was involved with a major robotic milking machine manufacturer for some years but has been totally independent for the past eight years. ‘We still look after robots on farms and I have a couple of engineers. We take out old robots and break for spare parts or sell as whole. We trade all around the world exporting to the likes of Canada, America and Europe. I’ve even got a dealer in Korea who supplies my robot add-ons and upgrades like liners to the Korean market.’ Utilisation of redundant and obsolete farm buildings has brought a new storage business and will soon see a new rural office complex.

‘We have our Yorestore which opened in March 2020 at the beginning of the first lockdown and now offers 40 self storage units. During that time many people who were furloughed moved back to live with their rural families and needed some where to store their belongings. There were all sorts of other reasons too and our stores are constantly busy.’ ‘The new rural office complex is using
the redundant dairy buildings and one of the planning conditions was that new access was built, which meant a 250 yard access road. That’s where the stone comes in very useful.’ If you need your stone harvesting Tim goes under the name Gibson Groundworks. He really is leaving no stone unturned. 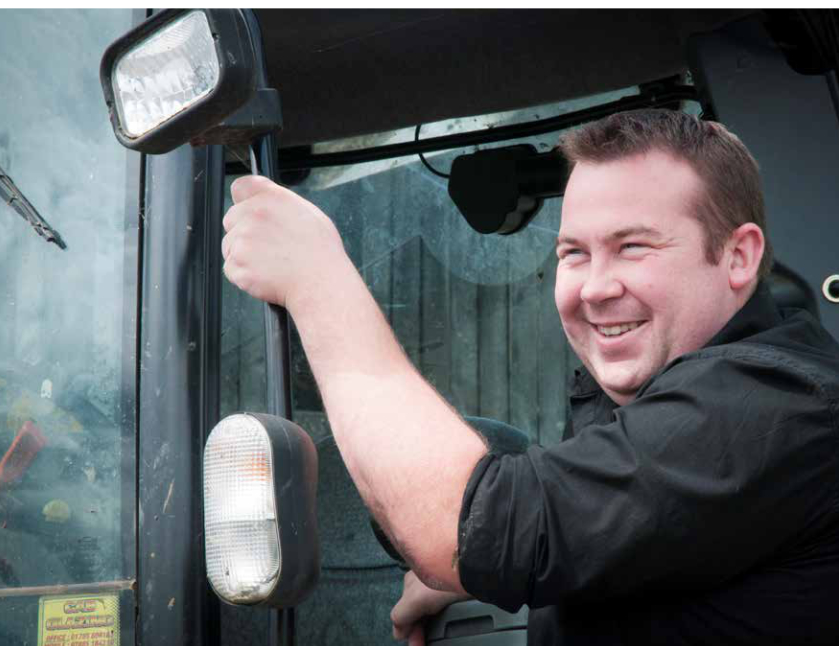 Dairy Tech 2022 Former farm buildings in Bedale ravaged by fire take on new lease of life
Scroll to top
This website uses cookies to improve your experience. We'll assume you're ok with this, but you can opt-out if you wish.Accept Read More
Privacy & Cookies Policy

This website uses cookies to improve your experience while you navigate through the website. Out of these, the cookies that are categorized as necessary are stored on your browser as they are essential for the working of basic functionalities of the website. We also use third-party cookies that help us analyze and understand how you use this website. These cookies will be stored in your browser only with your consent. You also have the option to opt-out of these cookies. But opting out of some of these cookies may affect your browsing experience.
Necessary Always Enabled
Necessary cookies are absolutely essential for the website to function properly. This category only includes cookies that ensures basic functionalities and security features of the website. These cookies do not store any personal information.
Non-necessary
Any cookies that may not be particularly necessary for the website to function and is used specifically to collect user personal data via analytics, ads, other embedded contents are termed as non-necessary cookies. It is mandatory to procure user consent prior to running these cookies on your website.
SAVE & ACCEPT
YM