Former farm buildings in Bedale ravaged by fire take on new lease of life as family are forced to diversify
A range of former dairy buildings that were destroyed by fire have been redeveloped as a North Yorkshire farming family take on an entirely new venture.
Back in 2017, the Gibson family were forced to cease dairy farming following the fire at Hunters Hill Farm near Crakehall, Bedale and look at alternative ways to generate an income.
Firstly, what had been milking cow accommodation was converted in 2020, into a self storage facility which is named “Yorestore” and got a name for itself during lockdown as a place for local businesses to store goods and for families moving back to the local area to put home contents into storage.
Since then following funding from “The European Agricultural Fund for Rural Development” a range of flexible office units have been created to rent out.
The farm worked with Hambleton District council on the design and meeting requirements for getting the grant for the development which has seen two buildings turned into a range of 10 separate office suites, linked to shared communal areas.
The offices can accommodate between one and five people, another wing has four clean kitchen rooms, designed to lease 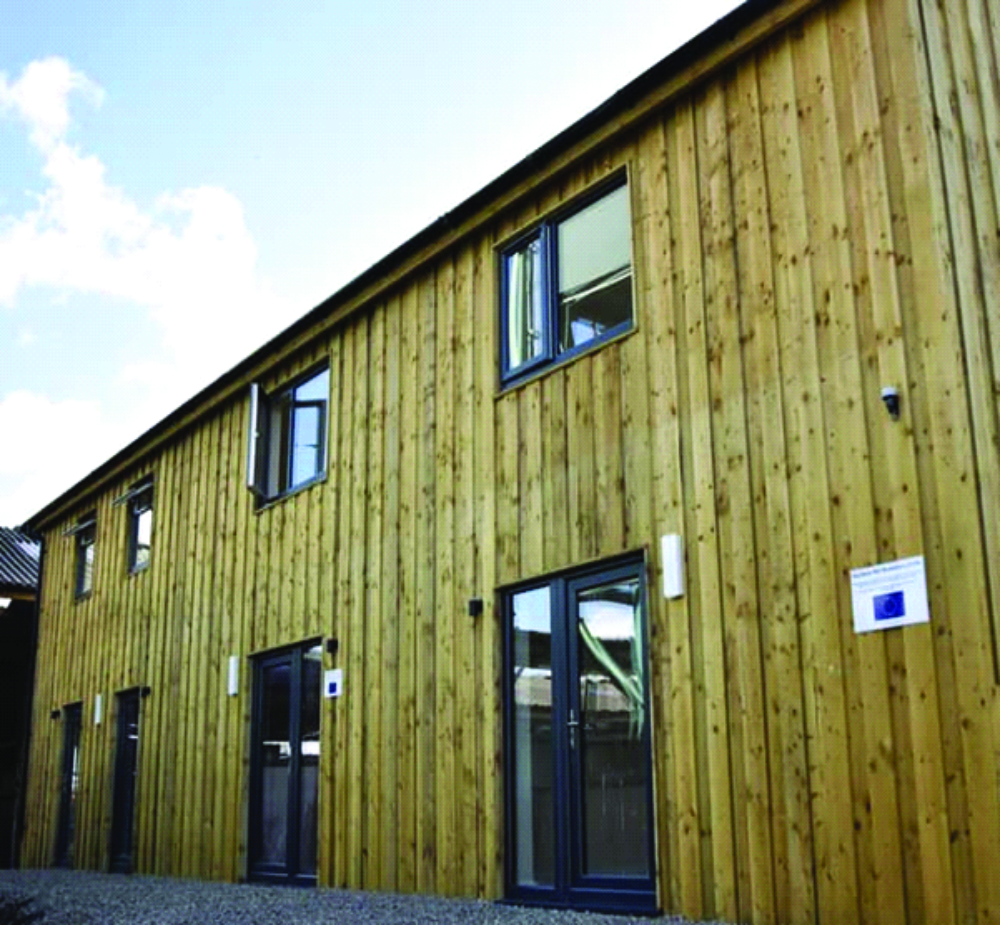 to small start up businesses in the food or beverage sector, while on the first floor there is an events and training room.
Uptake for the offices is “promising” with demand from the customers who already use the site as storage.
The event space had a special guest for its first event recently too.
Myra Shield (nee Gibson) was brought up at Hunters Hill and her 21st birthday party was held in the loft of a grain store all those years ago and she wanted to go back to her roots inviting friends and family back to Hunters Hill to celebrate her 80th birthday over the August bank holiday weekend.
She asked that no presents were given, and to instead donate to Blood Cancer UK in memory of her brother David Gibson who farmed at Hunters Hill, and passed away in 2005.
David’s son, Tim, now runs the farm and has developed the diversifications into storage and offices.
He said: “It has been a very difficult few years since the cows went, in fact we still have not had out full payout from the fire insurance which is now entering an expensive legal fight to receive the compensation we are due.

We were very fortunate in getting the grant towards the development, full credit to Jayne Cranston, of
Hambleton District Council, for her help in obtaining the funding.
“The self storage company YoreStore has gone so well for us, we are even working on a franchise model to work with other farmers to help bring a new use, to unused farm buildings.”
With his Aunt’s request of donations Tim topped up the fundraiser after another local business was very charitable to him.
Richmond based IT company, thecitysecret, has relocated its offices and gave away all its furniture which has been used to equip some of the offices at Hunters Hill.
When they declined payment, Tim rounded up the fund his aunt had started for Blood Cancer UK to £500.
The charity has said that for every £500 donated it will fund a research nurse for three days, who gives patients a hand to hold while they are testing new treatments.
By Emma Ryan
Saturday, 24th September 2022, 4:45 pm

We are delighted  that we will be attending AgriScot 2018!

We will be at stand 212a in the Upland Hall on Wednesday 21st November!

Join us at the 160th Great Yorkshire Show. We will be at the Theakston Stand 170 on Tuesday the 10th and Wednesday 11th from 4PM onward both days.

Sign up here for a free pint on us: https://tim-gibson.com/gys-pre-registration-form/ 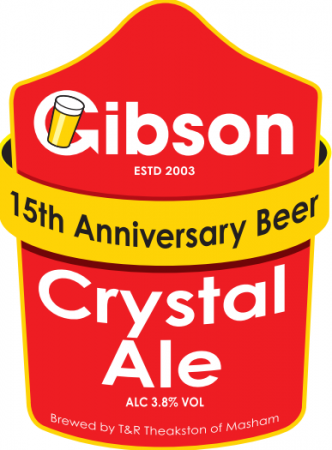 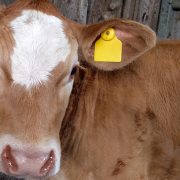 We are delighted to be joining our colleagues from Smartbow GmbH at EuroTier in Hannover from the 15th to 18th November on stand B54 in Hall 11.

Smartbow’s new LIFE ear tag is a winner of the 2016 EuroTier Innovation Awards.  The LIFE ear tag is a new concept in identification tags for cattle.  Not only can it be used for official animal identification but to also aid real-time location and health monitoring.  Due to their low weight, these ear tags can be used on calves from birth, allowing data to be collected seamlessly throughout the animals’ full life cycle.

Individual animals can be located via integrated LEDs whether they are housed or at pasture. The energy supply to the sensors is sufficient to last for several years. The system saves farmers time in terms of behaviour monitoring, general animal husbandry tasks and quality assurance and therefore provides benefits across the full spectrum of production functions. 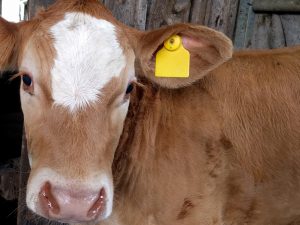 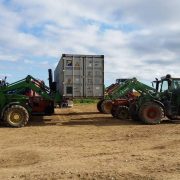 We are delighted to have shipped our first consignment of used milking robots to Quebec and are in the process of completing a second deal for a neighbouring farm. 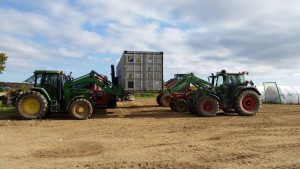 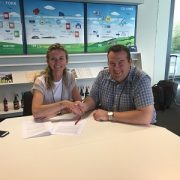 We are delighted to announce a new agreement with the Belgian hygiene company, CID LINES.

Tim Gibson Ltd will supply the existing dealer network with all CID LINES agricultural products and also look to expand the current number of outlets in the North of England.

Established in 1988 and employing nearly 200 people, CID LINES develop and manufacture a range of hygiene products for the agricultural, horticultural, automotive, food processing and hospitality industries across the World.

Partners of the National Mastitis Council Regional Meeting in 2014, CID LINES are highly involved in research and development programmes to prevent and manage mastitis and have formulated a range of medicinal and biocidal teat dips with this in mind.  A joint project with the University of Ghent’s Veterinary Medicine Research Unit in 2013 saw CID LINES launch the KENO-M software package to help dairy units manage mastitis.

With a large portfolio of high quality products for milking parlours, teat care, hoofcare, calf housing and equipment cleansing, our agreement with CID LINES now enables us to offer a complete range of dairy hygiene products at competitive prices.

Please contact us for more information on the range of CID LINES products or if you are interested in becoming a stockist. 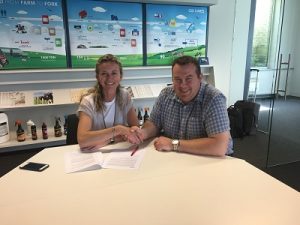 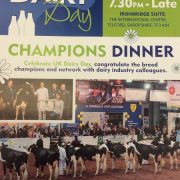 We are delighted to be attending the UK Dairy Day on Wednesday 14th September where we will be showcasing the SmartBow eartag system and Sieplo mixer buckets on stand L4 next to the CID Lines stand.

For more information, including directions and a timetable of events for the cattle show and sharing knowledge centre, please visit the UK Dairy Day website. 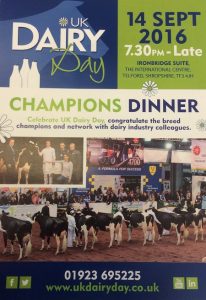 See us on stand L4 at the UK Dairy Day

This website uses cookies to improve your experience while you navigate through the website. Out of these, the cookies that are categorized as necessary are stored on your browser as they are essential for the working of basic functionalities of the website. We also use third-party cookies that help us analyze and understand how you use this website. These cookies will be stored in your browser only with your consent. You also have the option to opt-out of these cookies. But opting out of some of these cookies may affect your browsing experience.
Necessary Always Enabled
Necessary cookies are absolutely essential for the website to function properly. This category only includes cookies that ensures basic functionalities and security features of the website. These cookies do not store any personal information.
Non-necessary
Any cookies that may not be particularly necessary for the website to function and is used specifically to collect user personal data via analytics, ads, other embedded contents are termed as non-necessary cookies. It is mandatory to procure user consent prior to running these cookies on your website.
SAVE & ACCEPT
YM